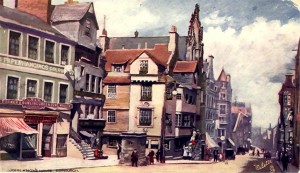 High drama on the way up to Edinburgh! The train pulled into Peterborough and I was literally minding my own business when a girl in her early twenties got on and took the seat across the aisle from me.

She had a lot of thick dark hair falling all the way down to the small of her back. She took off her rucksack which caught in her jeans and dragged them down to expose another amount of thick dark hair all over her arse! Naturally I looked (stared) a little (a lot).

When she caught me staring I had the common decency to quickly turn my head and look out of the window, only to find her father, mother and younger brother stationed on the platform staring straight back at me as if I was the pervert, not their hairy daughter.

I was cornered so I took out the old Sagem phone and pretended to play a game on it until Edinburgh. Little did they know the old Sagem came out in 1994, before games were even invented!!! Lol (x ten).

Ah, the old Sagem! Its always there for me when I need it (apart from abroad where it doesn’t work as it came out in 1994 – before going abroad was invented).

p.s Here’s a picture of the old Sagem for your viewing pleasure.