Christmas is almost upon us and we’re feeling festive here at Gin Riot. So we’ve had some of the country’s top scientists devise an incredible crossword for you to solve. 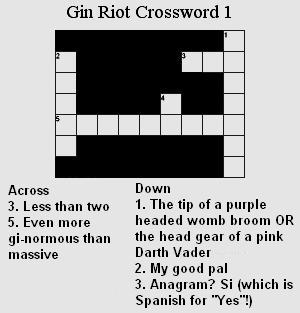 Not only does this crossword perfectly sum up Christmas but it also promises the prize of per’aps the awesome-most film ever made – Mega Shark vs Giant Octopus.

“The most titanic struggle ever witnessed between two mythical beasts, defying the laws of nature and threatening the entire (sic) of humanity in a vicious battle to certain death!”

This battle between two “mythical” (? – we’d never heard of either one of them before) beasts is the age old Goliath vs. Goliath (there’s no deadwood – eff off David). And they don’t waste either “mythical” beast. What’s the point of having an Octopus unless it’s gi-normous enough to smash a helicopter out of the sky with a mahoosive tentacle?  Or having a shark unless it’s mega enough (and angry enough) to eat a bridge or a plane?

Stars Debbie Gibson (of 80′s pop fame) and Lorenzo Lamas (that bellend out of Renegade (which is also awesome)).

Send us your crossword answers on a postcard (not literally of course- email us or leave answers in the comments) and the first one drawn out of the hat by my good pal Sammy will win a DVD!